What’s with blonde women with big boobs that they suddenly get cast as MILFs? Well, you can’t blame them if they’re already at that stage in their lives and are still at it.

Claudia is more like the cougar-type because she definitely looks like the one who’s going to make the first moves if she finds you attractive. You know by the size of her boobs that she’s going to use it to weaken you down.

If you have tho cougar fantasies where a blonde middle-aged woman tries to make advances on you, Claudia might be the one to show such a stereotype. 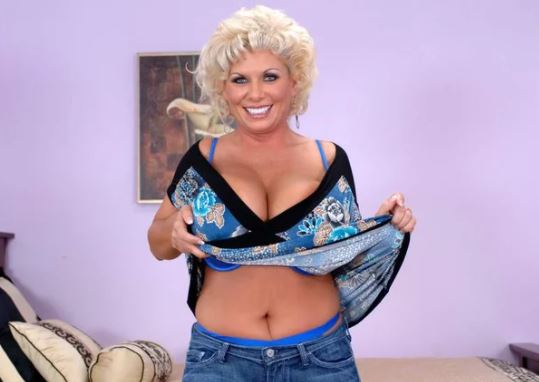 Claudia Marie will sing her way into your pants

She started out as a singer before realizing that she needed a better form of entertainment. That said, she ditched her band Trailer Park Trash and used her sexy pictures on its website for something bigger. Claudia has already got the clout as those pics got traction. So much traction in fact that Ron Jeremy appeared in a music video with them. It was only then she realized that she was worth more. Well, she added up that worth when she added to the size of her breasts.

Claudia may be one of the older ones right now but she’s still packing some serious heat thanks to those breasts. That Rockstar lifestyle also comes in handy when she swallows that mic.

You can call her versatile as well since she wouldn’t mind having an extra woman involved whenever she hooks up with a man. We cannot tell if she and Ron Jeremy have actually hooked up with the cameras off but it’s a possibility. No declarations here.

Claudia may be far from the Hollywood scene but she’s good where she is right now. Good thing the webcams are keeping her occupied.

Let’s focus on her breasts one bit

Claudia already has curves all over. Women like that should naturally have nice breasts already, right? Wrong! Apparently, the big tits and. big round fat ass she previously had isn’t enough. She decided to go extra-large on them with some G-sized goodies! Let’s give credit to those breasts as she has starred in many adult films already because of Naughty America, Score, and many others have made money out of those 3,500cc Saline Implants already.

She calls it her main body of work because literal work is done to it and she is proud to call it art. Consider her an artist since it’s what got her here in the first place.

Can you handle Claudia Marie?

Claudia is the type of woman that gives out the indecent proposals to boys hungry for jugs. You can already imagine the teenagers being overwhelmed with such huge breasts. Less is more doesn’t apply when we’re talking about Claudia. She isn’t happy enough with what she has until she gets more. Still, it’s something we would rather see then be unaware of. She’s turning 50 in a few years and shows no signs of slowing down. Her 14-year career is still finding new signs of life especially with the emergence of cam sites.

Is it worth mentioning that her waistline is 28 while her butt and breasts are 36? That’s some good proportions you would want from such a performer. How we wish she went back to her singing roots just so she can sing a song with our cocks as the microphone and our mouths as the speaker of moan. We can make use of an all-nude music video with her band playing too if you want a reunion. She’ll also surely place that mic stand in between her breasts.

You better watch out because if you find yourself cornered in those boobs, you might not make it out with your morals intact.